Though I wrote this story as a romantic memory, it actually came to fruition in a very odd manner.  I was walking through a small strip mall, and on a very narrow sidewalk, I passed by my father’s estranged brother.  We made eye contact, but didn’t acknowledge each other, not even a nod to say hello.  To me, it was weird to have certain shared memories, a shared lineage, yet we didn’t feel the need to even talk; him nor I. We definitely don’t have any sort of relationship since this uncle was never there for my father during the tough times. But, it did give me an idea for this short story, so I guess he can’t be all that bad.

It all started with a mention of her name.  Actually, though it was her name, the conversation was about someone else with the same name.  I had not heard that name in many years.  It had ended off so terribly, I had pushed thoughts of her to the far reaches of my memory.  But, after hearing her name after such a long time, oddly enough, I smiled.  I remembered her face, her smile, the smell of her freshly washed hair, the aroma of her favorite perfume and that little gasp she took when she laughed too hard.  I could, all of a sudden, hear the sound of her silver-beaded anklet, making a tiny sound with her every step, clearly in my ears.  I thought back to how she took care of her fingernails; always painted to draw attention to her beautifully long, slender fingers.  It was those same fingers she would run through my hair whenever she was about to smother me with affection.  I guess my smile had widened because my friend, who had been telling me a story about someone else with her name, stopped mid-sentence.

“Nothing funny.  I’m sorry.  I was just thinking of something,” the words stumbled out of my mouth.

“Something, or someone?”  He had read me pretty easily.

“Someone…but many somethings about that someone,” I said, almost embarrassed at being “outed” so easily.

“Wow, you still think of her, eh?  How long ago was that; six…umm..no, wait!  Seven years ago, right?!”  he asked, and answered all in the same breath.

“Yup, like another lifetime ago.  I don’t know how she popped into my head after all this time.  It’s all your fault,” I joked.

That night, on the way home, I drove by the park where I first held her hand.  It was our third date; we were strolling along, and she kept brushing her hand against mine.  I eventually took the hint and locked my fingers into her fingers. She had the softest hands I had ever felt; like what I thought a cloud would feel like when I was a child.  Years later, she would remind me of how she had to make it obvious to me that it was alright to hold her hand.  Every time she brought up that scenario, she would grab my hand and press it against her lips.  But, what I enjoyed most was what she did right after that; she would turn her head and rest her cheek on the back of my hand.  I never felt more in love or more manly than at those moments.  I felt as if I could protect her against any danger.

The next morning, I rummaged through some old picture boxes looking for some of her pictures.  I did not have any rhyme or reason for such actions, but I rarely do for most things I do in life.  In the process, I found many of the pictures she had asked for soon after our relationship had ended.  I do not recall now whether I had misplaced them or had kept them to spite her.  Either way, they were in front of me now and I found myself admiring her.  There were many reasons I had fallen deeply in love with her, but that initial attraction had been her eyes.  I remember the first time our eyes locked onto each other.  I had not known even her name, but that gaze was embedded in my heart from that moment.  It took me two weeks to finally track her down, through friends and acquaintances.  It took me another two weeks to build up the courage to ask her out for coffee.  Fortunately, it took only a three-hour coffee date to convince her to have dinner with me that same night.

We slowly built an empire of love, care and tenderness from that night onwards.  We shared everything from our sorrows to our happiness to our dreams.  Each and every dream consisted of us both being together and conquering all obstacles as a team.  Unfortunately, we had also been fixating dynamite at the base of our structure by never confronting our miniscule issues with each other over the years.  We fought and blamed each other for things that were the fault of neither.  Our love gave way to yelling and hateful words. Finally, one day, we both decided to bulldoze all that we had made together; never needing to even set off the dynamite.  I attempted to contact her soon after, to make amends.  I called like a maniac, several times a day, but she never answered my calls.   Her anger had led to mistrust and pain.  After a while, I called less and less, and eventually stopped.  As I made that last call, I cried for her, for us.  My tears rolled down my cheek, and as I wiped them away, my sadness turned to hate. I resented her for not answering my calls, for not coming back to me.  I resented the fact that it was easier for her to let go, to move on. I resented the fact that she knew before I did that we had no future together.

It has been a couple of months since that night my friend mentioned her name, in passing.  I have been thinking of her sporadically.  I replay many of the good times, the laughs, the places and people I met with her or because of her and I continue to evoke smiles of days gone by.  However, it is on one of the days when other things occupy my thoughts, as I walk through the mall, that I spot her at a distance.  I recognized her from that swaying of her hips when she walks.  I recognized her from the way she flipped her flowing stream of hair to the side so that she could look into the shop window.  And, I recognized her from the pencil-thin fingers, which were holding a gift bag.  I recognized all this from a distance.  What, or whom, I did not recognize was the man walking a few steps behind her.  He walks up and places his hand in the small of her back and whispers something in her ear, pointing towards the little kiddie rides off to the side.  She smiles and nods, and then continues to look in the shop windows.  Mutual acquaintances had told me that she had been introduced to someone by her parents, and that it was very serious; but that was at least a few years ago.  My gaze follows the man she smiled at, and I see him place a quarter into the coin slot of a rocking Mickey Mouse vehicle.  On that ride is a cute child; a toddler wearing a pink dress.  By this time, I have just about made my way to the woman that once ruled my kingdom.  I walk right behind her, and our eyes meet in the reflection of the store window.  She does not turn around nor do I stop walking past her, but our eyes remained locked into each other the entire time our reflections last in that window. I can feel her gaze on my back for a split second as I turn to look in the opposite direction.  As I look the other way, her little girl is laughing on the ride.  She has that same gasp as she laughs, just like her mother.

“Mommy, look at me!” the child screams.  From a distance, I hear a soft laugh that had once been a part of my world.

Once again, I smile at the thought of her.  I am happy for her.  I also realize that I am no longer in love with her. I realize that her reflection is much different than mine.  I realize that we had some wonderful memories that are worth hanging onto.  More importantly, I realize I do not hate her anymore. 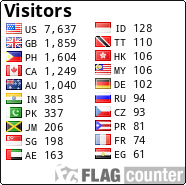